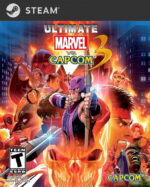 Marvel and Capcom join forces to deliver the most frenetic 3 vs. 3 tag battles ever with Ultimate Marvel vs. Capcom 3. This release comes fully loaded, including all previous DLC, and the Marvel vs. Capcom: Official Complete Works. Select some of the most iconic Marvel and Capcom characters, and customize your team with “Heroes and Heralds” mode. Once you’ve honed your skills, hop online and go head-to-head against players from around the world to see who is the strongest in the universe.

With so many characters to try, you’re not going to get bored with this one anytime soon. Fight pace is fast and furious, just how you would expect it. Graphics, animation and sound are all solid. If you’re a multiplayer fan the online presence can be quiet at times.