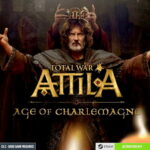 The world lays in tatters, exhausted, bleeding, scarred and burnt, the people desperate. But even after the apocalypse there are men willing to give everything to return to light, to knowledge, to civilization. Whatever the cost, and whatever the means…

It is the age of a chosen few, an age of greatness, when the first true kings built vast kingdoms from the ashes of past empires… it is the Age of Charlemagne.

The year is 768AD and, after the death of his father, Charlemagne is to share the Frankish throne alongside his brother. A situation that ill-befits a man of his vision, and their relationship clouds as he feels the fiery blood of his grandfather, Charles Martel, stir in his veins.

Friends, enemies and opportunity populate a continent tired of conflict, the people eager for peace. Charlemagne finds himself at the head of a new age of education, religion and warfare, and sees all as tools to unite, stabilize… and expand.

The Saxons, the Saracens and the Vikings will all have something to say to a man of such ambition. It will take guile, charm, intelligence and ruthlessness to succeed above all others. Charles the Great, King of the Franks, the Father of Europe. Will you make your mark in his image, or will you become your own king?