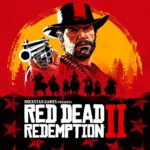 America, 1899. The Van der Linde gang are outlaws on the run from federal agents who want them dead or alive. But when Arthur Morgan’s loyalty is tested by his own ideals in this rugged heartland of America where anything can happen at any moment – will he choose what matters most?

Red Dead Redemption 2 is the ultimate game for any action fan. With its comprehensive list of features, there’s something in this title that will appeal to everyone no matter what their preference may be! The Story Mode offers an engaging story with plenty of quirky characters and difficult challenges while Photo Mode lets you take pictures like never before. As well as these main modes there are tons more including free access shared living world Red Dead Online where players can choose from multiple roles – such as a Bounty Hunter, Trader, Collector, Moonshiner and more.

The new graphics in Red Dead Redemption 2 for PC are an improvement over its predecessor, with enhancements that make the world more immersive. The draw distances have been increased to allow players greater visibility throughout all areas of this massive map and higher quality global illumination brings out every detail clearer than ever before – even at night!

The game also offers HDR support, the ability to run high-end display setups with 4K resolution and beyond. It is capable of delivering faster frame rates than its console counterparts as well.