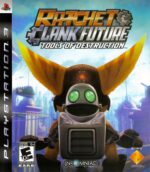 An orphan of the universe, Ratchet has never known anything of his Lombax origins. When an alien tyrant driven by an unexplanable hatred for Lombaxes attacks Ratchet and Clank’s home, they are thrust into an epic adventure where they will discover that Ratchet’s past is the key to the galaxy’s future.

Combining dazzling visuals with all new gameplay and an epic storyline, Ratchet & Clank Future: Tools of Destruction™ marks the beginning of a new saga and the debut of the best selling Ratchet & Clank franchise on the PS3.