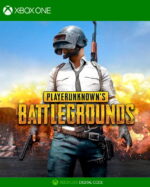 From the makers of the best-selling PC phenomenon, PLAYERUNKNOWN’S BATTLEGROUNDS (PUBG) drops players into a competitive survival battle where you’ll engage in a heart-racing fight to be the last player left alive. Loot supplies, find weapons, and gear-up to take on the competition. Emerge the lone survivor in a thrilling game experience full of unexpected, adrenaline-pumping moments.

The battleground awaits.
Parachute onto a massive remote island with nothing but your wits and the clothes on your back. Explore on foot or use vehicles to find weapons and supplies to gear-up for fast-paced combat.
Fight alone – or team up.
Go solo or team up with other players as you engage in a heart-racing fight to the be the last person left alive.
Claim victory.
Defeat every player on the map to earn bragging rights as the last player left standing in the ultimate life and death fight.
Xbox One X Enhanced.
PLAYERUNKNOWN’S BATTLEGROUNDS is Xbox One X Enhanced with support for 4K. HDR enhanced on Xbox One S and Xbox One X with supported TVs.

Highly addicting and fun… when it is running smoothly. Upon initial release the game had frequent crashes, hence the ‘game is a work in progress’ warning, but with recent updates the game has definitely become more reliable. If you’re looking for a great Battle Royale that is getting better with every update then you should be good to go with PUBG.