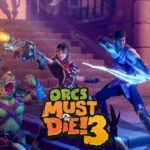 Orcs Must Die! 3 brings orc-slaying chaos to a previously unimaginable level. You can either play solo or with 2 players in co-op. Arm yourself with an arsenal of weapons and traps. This long-awaited sequel to the award-winning series will slice, burn, toss, and zap hundreds of repugnant orcs into oblivion.

War Scenarios, a new addition to the series, pits players against the most powerful orc armies. Mountable War Machines provide players with the firepower they need to heave and stab, carbonize, dismember the evil intruders.

More of everything
Orcs must die! 3 brings everything fans loved from the previous two. You get more orcs, traps, weapons, upgrades, and a better look. Everything has been cranked up to eleven.
A New Story
Explore a brand new story that takes place more than 20 years after Orcs must Die! 2, where the War Mage & Sorceress rebuilt the Order and trained new apprentices.
War Scenarios
All new War Scenarios fulfill the promise of huge scale, first laid out in Orcs Must Die! You must confront the orcs on the battlefields around the castles. You can crush the rift by thinning out hundreds of orcs before they reach the walls.
War Machines
You will need new weapons to kill and destroy these hordes. War Machines can be described as traps that are large in scale. You can launch hundreds of ragdolling orcs by setting up your mega flip trap. Mount your mega boom barrel launcher to unleash pyrotechnic glory.
It Never Ends
The orcs continue to come long after the story ends. You can join the orc-slaying legend by taking part in Weekly Challenges, or you can see how long it takes to survive in Endless Mode.
Take Drastic Steps
Orcs Must Die! 3 includes the Drastic Steps campaign, content, and more for free. This includes terrifying flying enemies, heroic warrior guardians, and many other tools for orc destruction.
Scramble To Survive
The new Scramble Mode puts you up against evil orcs that evolve with more sinister and difficult tricks. You can collect modifiers for each level you make it through, so you always have something to fight back with!