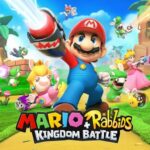 A mysterious vortex has ripped apart the Mushroom Kingdom, bringing the chaotic Rabbids to this once-peaceful place. Mario, Luigi and Princess Peach must join forces with four Rabbids heroes to restore order. They will fight with weapons in four worlds full of combat, puzzles and unpredictable enemies.

Mario + Rabbids Kingdom Battle was created exclusively for Nintendo Switch™. It combines all the great things about Mario’s universe with the hilarious antics of the Rabbids.