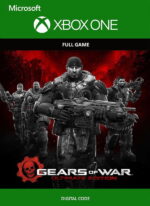 Experience the game that launched one of the most celebrated sagas in entertainment with Gears of War: Ultimate Edition.

The shooter that defined the first generation of HD gaming has been painstakingly remastered in 1080P and modernized for Xbox One, and is packed full of new content including five campaign chapters never released on Xbox.

The First at Its Best
The landmark original Gears of War remastered in full 1080P with five new chapters available for the first time on console.
Genre-Defining Multiplayer
The most visceral online shooter returns, now at 60 FPS. Includes all original 19 maps remastered and six competitive modes including new Team Death Match, updated King of the Hill and a special 2v2 mode designed by the Gears community.
Brothers to the End
The game that pioneered campaign co-op is back. Complete the campaign solo, with a friend on Live**, or in two-player split screen mode.
Re-Geared for a new generation
Players live and breathe the role of Marcus Fenix. A disgraced former war hero, Marcus seeks personal redemption as he leads his fire team against an onslaught of merciless warriors from below.