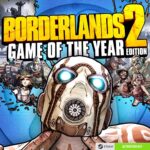 Borderlands 2: Game of the Year Edition

A new era of shoot and loot is about to begin. Play as one of four new vault hunters facing off against a massive new world of creatures, psychos and the evil mastermind, Handsome Jack. Make new friends, arm them with a bazillion weapons and fight alongside them in 4 player co-op on a relentless quest for revenge and redemption across the undiscovered and unpredictable living planet.

ALL-NEW CHARACTERS AND ALL-NEW CLASSES. All-New Characters and All-New Classes: Four all new playable classes including the Siren, the Commando, the Gunzerker and the Assassin. Step into the role of the Gunzerker, whose highly deadly skills allow him to dual-wield any two weapons found in the game. Not only that, you will build on that skill to do more things with two guns than you ever imagined possible. Dual machine guns? Cool. Dual rocket launchers? Of course! Dual Sniper Rifles? Sure, if that’s your thing! Want to try other styles? More tactical perhaps? There are multiple classes to choose from!

DYNAMIC CO-OP ONLINE, AND LAN. Share your adventures with friends both online and via LAN. Borderlands 2 features a seamless system enabling you to drop in and drop out of a campaign without ever having to restart the game. On top of that you can even take your new gear from any game to any other!

WORLD CONNECTED STORY. Find yourself left for dead in the frozen tundra of Pandora as you begin your quest of revenge and redemption. Expose the evil surrounding the Hyperion Corporation and take on the perpetrator of a universe-wide grand deception — the nefarious Hyperion CEO, Handsome Jack. (Oh, also: he’s stolen credit for the opening of the Vault.)

87 BAZILLION… EVERYTHING. In addition to the new gun system, you will lust after procedurally generated shields, grenades, Relics, class mods and much, much more. And you thought the original Borderlands had a ton of loot!

BRAND NEW ENVIRONMENTS ON PANDORA. Hunt through entirely brand new areas of Pandora that are more alive than ever! From the arctic tundra, through the dangerous grasslands, past the mysterious corrosive caverns to beyond, you’ll be surprised by the unpredictable world of Pandora at every turn!

CAPTAIN SCARLETT AND HER PIRATE’S BOOTY. Enter the hostile wastelands of Pirate Bay in search of ancient treasure buried somewhere in the waste, a cache that would make even the most stoic of Pandora explorers hunger for its discovery. It’s rumored to be guarded by the largest, most vicious creature on Pandora – but that shouldn’t deter a real adventurer… featuring new wasteland locations, new enemies, new quests, and much more loot!

PSYCHO PACK. Take a peek at Pandora from behind the menacing eyes of Krieg, the Psycho Bandit, an all-new character and the 6th playable class in Borderlands 2.  You’ve fought against them as enemies, now use that aggressive energy on the vault hunter’s side.  Slice, dice, light yourself on fire and blow things up – taking damage was never so rewarding – or so much fun!

COLLECTOR’S EDITION PACK. Outfit the character of your choice with new heads and skins in the Collector’s Edition Pack. This pack also includes the Contraband Sky Rocket Grenade.

CREATURE SLAUGHTERDOME. Enter the Creature Slaughter Dome and face off against the toughest monsters in all of Pandora. Your efforts will not be in vain. Gain experience and gear to bring back into the main game. Endure the battle, and you will receive numerous rewards, including Moxxi’s Rocket Launcher.

MECHROMANCER PACK. This download grants the Mechromancer, a 5th playable character class who can summon a destructive robot named Deathtrap. In addition to this new class, this pack also includes bonus items which were included in the Borderlands 2 Premiere Club Pack, including the Gearbox Gold Gun Pack, a Golden Key, which unlocks rare items in the mysterious Sanctuary Loot Chest, and the Vault Hunter’s Relic, which boosts your gear-hunting fortunes.

MR. TORGUE’S CAMPAIGN OF CARNAGE. Enter “Mr. Torgue’s Campaign of Carnage” and see if you have what it takes to become champion of this brand new storyline in Borderlands 2.  Fight for the Big Loot against some of the baddest baddies in Pandora, including hordes of Biker Bandits.  Plus, take special quests from Tiny Tina, Moxxi and others for extra rewards.  And don’t forget to bring your friends — those higher levels get pretty tough.

SIR HAMMERLOCK’S BIG GAME HUNT. In Sir Hammerlock’s Big Game Hunt, players will enter an uncharted territory deep in the swamps of Pandora where a massive Hyperion ship has crashed. The wreckage is rumored to have stockpiles of loot. But watch out, mutated creatures, and armies of savages also have an interest in the ship.

TINY TINA’S ASSAULT ON DRAGON KEEP. Sorcerers, Wizards and Crumpets, oh my! Join vault hunters, old and new, in Tiny Tina epic quest of revenge and redemption. Tiny Tina’s Assault on Dragon Keep, the biggest and most inspired add-on content in Borderlands history, features a game within a game, as Tiny Tina takes on the role of Bunker Master in a game of “Bunkers & Badasses”. Travel through a dark and ever changing world of castles, dungeons and magic forests as you fight off skeletons, orcs, dragons and more. Explore side missions and answer riddles as you roll your insight stat to gain new and amazing loot. Join with friends to save the queen and restore peace and order to the world once more.

ULTIMATE VAULT HUNTERS UPGRADE PACK. Take Borderlands 2 to the next level. The Ultimate Vault Hunter’s Upgrade lets you get the most out of the Borderlands 2 experience. This pack includes level increases up to level 61. Play through the game again with access to new weapons, gear and more.