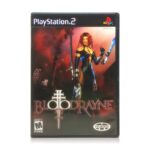 Reprise the role of BloodRayne, a dhampir born from the unnatural union of vampire and human. In BloodRayne 2, you can perform new acrobatic actions on poles and rails, fighting combos, and 12 finishing moves. The more creative your kills are, the more you can upgrade your weapons and abilities. Fill the Bloodlust meter to activate Blood Rage for powerful attacks. Master your vampire powers to stop your evil siblings from creating a new era of vampire supremacy where humans are mere cattle for the bloodthirsty predators that hunt them.

+ New acrobatic action on poles and rails offers variations for fast-paced blade and gun combat.
+ 12 fatality finishing moves like “the cleave” and “stab and behead” let you end feeding sequences with a flair.
+ All new highly destructible, interactive environments set in a modern day city.
+ Advanced melee combat for deeper, more precise fighting with more than 30 combos. Do the combo you want, when you want to do it. After earning a combo, it’s added to a reference menu accessible on the Pause screen so skilled fighters can test out all of her available moves.
+ New devastating powers include Enhanced Blood Rage and Ghost Feed.
+ Revamped aura vision serves more integral role in game play.