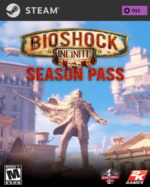 Take your Bioshock Infinite experience to the next level with the Season Pass, which includes 4 DLC packs! New gear, upgrades and achievements as well as two completely new episodes!

More BioShock Infinite content? Yes please! The main reason you’re going to want to pick up this DLC is for the Burial at Sea episodes. They pay homage to the original BioShock and Rapture and help tie the two games together. The story is a bit uneven and could be longer, but you’re not going to want to miss out on the experience. The Early Bird and Clash in the Clouds packs are a nice added bonus.