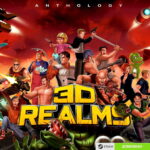 The 3D Realms Anthology is a download-only 32-game collection – that’s the entire 3D Realms library (excluding Max Payne and Prey). All the classic games you remember playing back in the day.